The LLC smartMeme Studios provides story-based strategic communications, advertising, graphic design and media production services to green and socially responsible businesses and nonprofits, foundations. Our approach is grounded in a visual and narrative analysis of change- the recognition that we all understand the world and our role in it through the experience of stories, place and community.

RLM is an entertainment company that supports its artist and its community through positive music. 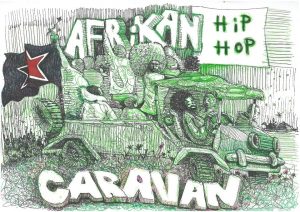 The Afrikan Hiphop Caravan is an annual project run by grassroots Hiphop Activist Networks spread across the continent and the Afrikan diaspora. Its vision is to build a strong and united Afrikan Hiphop Movement and its mission is to establish a cohesive network of Afrikan Hiphop Collectives with strong ties to like-minded organizations worldwide. Thus, key aims of the project are: 1) to build a sense of agency and self-empowerment among politically-concious, community-based Hiphop artists, who often due to challenging socio-economic realities and political repression feel marginalized and isolated; 2) to transcend borders to enable artists and activists to share their skills, resources and struggle experiences; 3) to create alternative platforms for dialogue between activists, artists, academics and working-class communities.