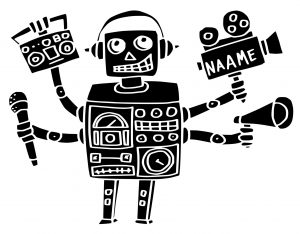 The Northwest Alliance for Alternative Media and Education is a non-profit dedicated to creating alternative media content, connecting local media makers and capacity-building amongst community groups dedicated to social justice. The organization’s mission is to amplify the work of alternative radio, print, film, and strategic media makers in the Pacific Northwest.

Our organization is comprised of a board, advisory committee and a network of dedicated volunteers. Primary activities include cultural programming for underserved youth, alternative media events, conferences, independent media content, speakers bureau and fiscal sponsorships.

NAAME was founded in 1981 as part of an effort to bring Oregon’s progressives together in one coalition to oppose the growing power of conservative forces in this state. The main project of the organization was the creation of The Portland Alliance, the city’s oldest alternative progressive newspaper, which gave voice to environmentalists, trade unionists, social justice activists, and others who are usually shut out, ignored or maligned by mainstream media.  The Portland Alliance was in print publication through 2011 and continues to have an online presence (www.theportlandalliance.org).

When the Portland Alliance discontinued print publication, the organization shifted focus and came together with alternative media makers between Oregon and Washington to re-envision a broad scope media work both regionally and nationally. Inspired by the Allied Media Conference and other national and international independent media groups, NAAME started the Cascade Media Convergence (CMC).  The first and second CMC’s took place in 2014 and 2015 in Portland, Oregon.