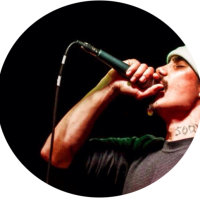 Jose Terrance Flanagan (Born December 30th, 1989) better known as his stage name “Talilo” is a Filipino-American hip hop recording artist residing in Portland, OR. Known for his quick lyrical delivery and spiritual inspiring lyrics he continues to pursue his dreams of being a world wide known recording and performing artist. Most people relate his quick style to “Bizzy Bone” from “Bone Thugs&Harmony”.

Born in Iloilo, Philippines, he came to the states at the age of 2. His mother was a high school student in Iloilo, Philippines and his dad was in the military stationed there.Talilo grew up on hip hop and was attracted to hip hop because he related to the struggle that is voiced with in the genre, it was no surprise that he would grab the mic by the age of 16. Being Asian American, growing up low income and feeling unwanted in society, eventually he would make decisions that would end him up in jail and in prison. After being released from a two year sentence at the age of 21, he came out as a different person influenced by spiritual values that carry him until this day. He has done what he said that he would do once he got out of prison, “Go to school for Music, Start his own Record Label, and find a job”. He now has his own band (Ancient Sol), CEO of his own company RLM Entertainment (with a certification from Portland Community College for Professional Music), in college majoring in web development and works for New Avenues for Youth ( a non-profit organizations serving homeless youth). Talilo has a heart for people who have been through similar things as his self, people that have experienced death, drug abuse, homelessness, imprisonment, abandonment, loss, and regrets he continues to inspire others with his music knowing that his purpose in this life is to help people find their own purpose in life.